Due to my laziness, this is the reader's digest version of the last 5 days of NVGP. I've had A LOT of spare time but nothing (in my mind) inspiring to write.

Day #2 was an early morning Time Trial followed by an evening crit. The TT went ok. I REALLY missed my TT bike though. I felt like I was cheating on it by racing a TT on my road bike. But rules are rules and road bikes were mandatory.
After hanging out ALL day, it was time to race again. The race was fast, furious, and a little bit dangerous. There were crashes everywhere including one that took me to the ground. After the race (no special results to report for Team VBF) we got taken out to dinner by a great friend, Marco. It was yummy and we were well fueled for the next day. 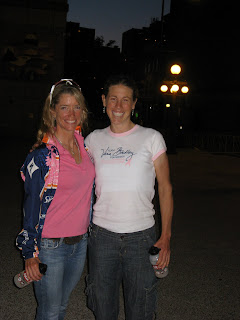 Teammate Kristin and I after dinner
Day #3 was to be a long, hopefully hard, road race. Early morning spin followed by chillen and fueling for the evening race. We went to the race arena early for a library visit. We talked to kids of all ages about riding and racing bikes. It was pretty fun. That was followed up by a coffee shop stop for espresso, fuel and team tactics.

We chamois-ed up, rode around, signed in and planted ourselves at the start line. 3 minutes later they announced the race was "called" due to bad weather and tornado warnings. Called? What the heck does that mean? We rode back to the car, got in and drove home. A whole lotta preparation for nothing. Race lost.

Day #4- 4 shots of espresso at 4pm and no race, made it challenging to sleep. So after sleeping in, we went for a morning spin. It was very nice to wake up to this view every morning from our host house. 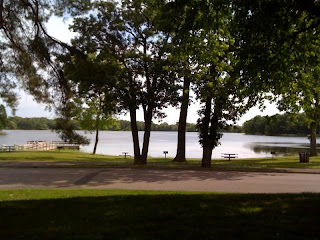 We had another day to kill before an evening crit (but when you sleep in till 9am, the day goes faster). We drove to the crit, found awesome parking in the driveway of nice people who let us come in their house to use the bathroom, then raced. Again no special results to report (we need a sprinter!). Drove home, got rubs and went to bed.

Day #5 was the Me No Monie race. It was a new course this year and after all the crit racing it was a welcome relief to have a REAL hard road race. It was good. No special results but we tried.

One of the best parts of the race was getting there. We had heard rumor the traffic on the Interstate was very bad, so we drove on back roads to the start in Wisconsin. It was beautiful. We even got stuck behind a draw bridge. 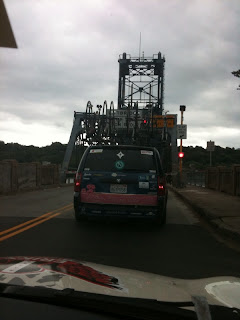 The best part of the entire day, however, was my sandwich bowl our Swanny made for me. Being gluten free, I can't eat the bagels she makes them on, so I got a rice bowl with all the goodies. It was amazing. 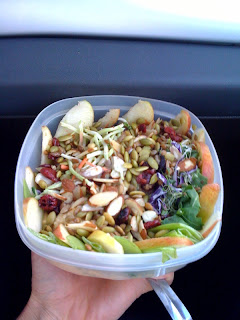 Day #6-Stillwater "crit". Ouch. It's 50 minutes of pain and more pain. The result was less than stellar (I lost my GC position). I then had to go to USADA for anti-doping. Luckily, I don't have a problem producing a "sample" so I was outta there fast and back in the team van to drive back to our host house where, upon arriving, I sat in the van for another 10 minutes with the Ginger Ninjer. We were cooked (I did get another sandwich bowl so that made me happy).

Later were ribs, chips, potato salad and ice cream cake from our host parents. It was great.

I am finally feeling better after today's effort and am very much looking forward to flying to Bend, Oregon tomorrow. I'll get to see my parents who are driving from Colorado to cheer us on at Nationals at the end of the week.

Nice job Alison. I'd be happy to be your sprinter. :)