A weekend of racing is fun. 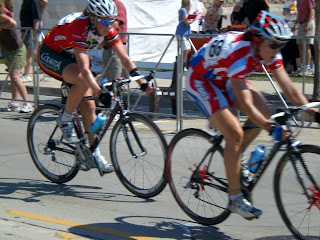 A weekend of racing spent with family and friends is better.

A weekend of racing with family, friends and coffee is the best. 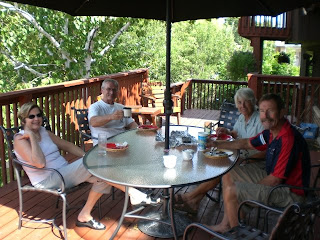 A weekend of racing spent with family, friends, coffee and a lake is, pretty much, THE most bestest. 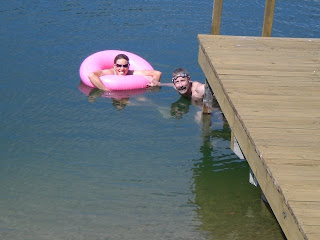 This weekend we raced Crit Nationals in Downers Grove. The Mom and Dad came to cheer on Team Colavita/Sutter Home p/b Cooking Light AND to visit The Dad's long time friend Gary. It was good fun.
Posted by AP at 5:59 PM No comments:

Four years ago, I had one cycling jersey. This jersey was a hand-me-down from a friend. It was black with a skeleton of a fish on it and I loved it. I still do. But it was only one jersey, and it was the only one I had.

It never occurred to me to buy another jersey. I wanted to know how I could win a jersey. Specifically "that eastern women's series leader jersey". My goal was to not have to buy a new jersey. I was either going to win one, or get one from a team.

I moved to Colorado so the Eastern Series jersey option was out, however I did find a team that for a small fee would give me support and not only a jersey but shorts too. Now I had two jerseys.

This year, I have done a pretty good job of acquiring free jerseys. Not only from the two teams I ride with (USA National Team and Colavita/Sutter Home p/b Cooking Light), but from winning them.

Climber and stage winner jerseys from l'Aude, most aggressive rider jersey from Thuringen, and best of all, the Stars and Stripes/Bars jersey from winning the National Time Trial Championship yesterday. 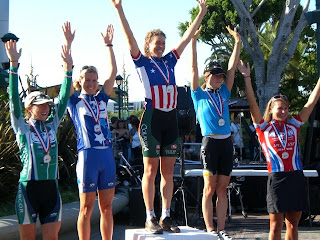 Though the black fish skeleton jersey is still my favorite and I still wear it, this new jersey is the coolest and by far the most rewarding. 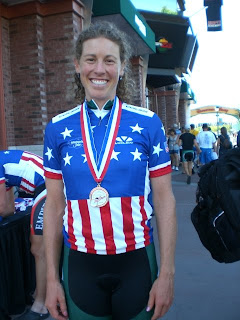