Day 4-the day I was most looking forward to and dreading a little bit. First was to be the 2 hr circuit race on the Laguna Seca Speedway with the famous cork screw downhill. Next would would be the short track mtn bike race less than one hour after the circuit race ended. Ouch.

After everything I had heard about the circuit race and the speedway, I wanted to win. I've wanted to win this circuit race since the day I found out I was coming to Sea Otter. But how could I put out the effort required to win when I knew, in the back of my mind, there was another race less than an hour afterward?

Answer, say your goals out loud. I told everyone, my teammates, my director, mechanic and my host parents, I wanted to win this race. Now, the win out weighed the short track by a LARGE margin.

Long story short, the race went as planned and I won. I used the cork screw to my advantage, attacked on the downhill, and held off the other two. It was a sweet victory! 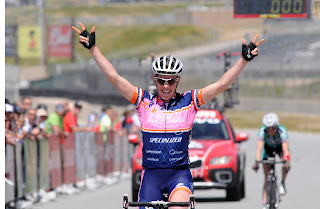 After a few short interviews, I changed my jersey, my socks, shoes, gloves and bicycle. Time for the short track.

I've never done a short track mtn bike race before. There was no pressure and no expectations (I thought I may go from getting first to getting last). 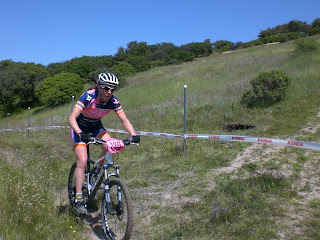 It was fun, it was hard, and I was tired, but it was SO cool to race road bikes and mtn bikes in one day.
Posted by AP at 7:15 AM