Come March, I try to have at least one "weekly commute" (i.e. big ass bike ride). These "commutes" can be as simple as riding to Boulder and back, or riding to my ride then riding home, or ride from point A to point B.

These rides all have something in common- they usually kick my ass and involve some sort of drama.
Yesterday's commute was no exception and it was actually a real commute.  The route-my parents place in Littleton to home. C-470 trail to Golden and up Golden Gate.  Pretty basic.

It seemed a little epic though.  Why is it that a point to point 4hr hilly ride viewed as "wow, you're doing what?" when a 4 hr ride from home is no biggy and doesn't seem that epic?

Everything started off well. The C-470 bike path is awesome. I met a nice man named CJ and we rode together for a while.  Then we got detoured in Bear Creek due to a "controlled burn".  Turn around, ride another bike path, saw a coyote on that path! Back to original path and on to Golden.  Make wrong turn, 2 miles downhill, followed by a U-ey and back up 2 miles to correct turn. Water and potty stop at Gas Station and on to Golden Gate Canyon.  First half of commute in the bag.  36 miles and 34 of it was on bike path!!  Awesome.

Up Golden Gate and it felt like I was on a totally different ride. I was in for 2 hrs of climbing, in a head wind, and little to no shoulder. Not to mention they were "tar-ing" the cracks in the road, so I had to stop a couple time to clean my tires so as to not detonate my Detonaters.   Thanks to the head wind and the steepness of the road, at one point, I was going 4mph with a 42 cadence.

Long story short, I started to crave a Snickers bar.  That's never happened before, but I went with it. 1 mi from the P2P, I stopped, got a Snickers and chowed it down. Yum.  The best $.87 I have ever spent! 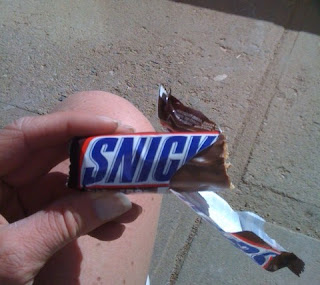 Only then did I look at the Nutrition facts.  At least 3 of the ingredients were soy products.  Not good for me and my belly.  "Oh well, it was dang good".

I continued on, but 10 minutes later, the bloating and gas began.  Good thing it was mostly downhill home now.  This is my favorite view.  It means I am almost home and have no more climbing. 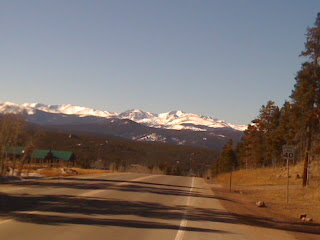 I made it home, 5 hrs later and spent the next several hours on the couch due to fatigue and belly pain.  Dang Snickers...kicked my ass.
Posted by AP at 3:18 PM

I totally know what you mean about 4 hour out-n-back rides feeling like a normal day but a 4 hour point A to point B feeling like a HUGE epic adventure. We have a friend who rode up from Denver once---I was SO impressed until he reminded me it was only about 40 miles. hahaha

Glad you made it home safely and relatively happy (except for the Snickers Bar incident!!!) Riding in CCC would make me nervous!

Way to keep it fresh though! I like it:)